Side project: booklet printing in Ubuntu made easy

Booklets consist of sheets of paper folded a couple times to form a book-like version of a document. For example, you could create an A5 booklet by printing a document on A4 paper, 2 sheets per page, with the sheets arranged in such a way that the resulting pages of A4 paper can be folded in half to form an A5 booklet.

I prefer booklet printing of documents over plain duplex printing because it wastes a lot less paper, and results in a more comfortable size to carry around said printed documents.

Unfortunately, Ubuntu doesn't have a booklet printing option unlike MacOSX (so I've been told). This means that printing documents as booklets involves saving the document and running it through a couple of commandline tools before sending it to the printer. Because these steps are too elaborate, I knew my natural laziness would kick in and I'd stop printing booklets if there was no automated solution.

I decided to create a CUPS backend to print booklets. Once installed, the booklet printer that uses this backend is available to any program that uses CUPS for printing. On Ubuntu, that means every program :) When the booklet backend receives the PDF document, it converts it into booklet form and forwards it to any printer you want.

The backend script requires a couple tools that need to be installed first: The code for the backend then, is very simple:


To use this backend on Ubuntu, download the code into /usr/lib/cups/backend/booklet and set it executable. Then, goto http://localhost:631 and login to your CUPS interface. Create a new printer of the booklet type. Next, type in the booklet printer URI: booklet:/MyPrinter (mind the single slash) will install a booklet printer that forwards the processed document to the "MyPrinter" printer. Make sure it's a duplex printer. Give the printer a name (e.g. "booklet") and indicate that it is a Generic Postscript Printer. Finally, set some default options. In my case, I want A4 paper and duplex along the long edge (standard).

The printer should now be installed and ready for use 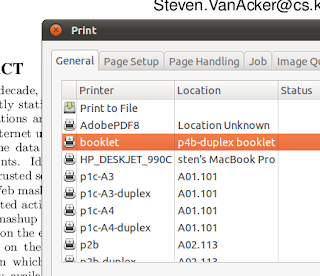 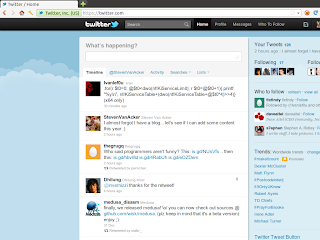 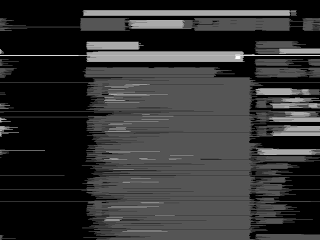 31 Jan 2011 In the past, I've used hosting provided by the university for a couple of my projects. With the closure of ACL however, that option is getting more difficult.

In addition, The hosting solution used by OverTheWire is a dedicated server, on which we run our own virtualization platform. The resources on that server are getting exhausted.

So I'm faced with a couple of solutions, the most realistic being to either get another dedicated server or get a bunch of virtual private servers. Since a dedicated server is too expensive to buy at once (I don't have 10 projects ligned up to fill a single dedicated server at once), I decided to go for VPS.

There are a lot of VPS providers out there, and a lot of virtualization platforms. For the OverTheWire projects, I prefer Xen since that allows to run a custom kernel. For other projects, I don't really care that much, but it seems OpenVZ is a standard container-based solution.

So, I set out to find the optimal hosting for my projects. I extracted the list of VPS providers that were listed on LowEndBox and went over them one by one. Most VPS providers have more than one offer and I decided to look at the most common configuration to make it easier to compare.


The list contains 287 entries of which 57 providers were down/out of business/no longer support VPS.

I thought it would be an interesting excersise, with results that would be interesting to a lot of people. So I made it a community effort by putting up a google spreadsheet where people could help fill in the details.

The result of the survey can be found here: https://spreadsheets.google.com/ccc?key=0AimYZRRoPGFidFhPTF9TdXRneVFxdkREeG5OcFhFZHc&authkey=CLDn6p8J&hl=en

Although a lot of fields are not filled in, like whether a VPS accepts PayPal, does rDNS or has a console (VPS providers should be more clear about this type of thing on their website), it is clear that there is a wide variety of solutions. Especially in price.

15 Jan 2011 I graduated for the second time last year, getting me the grade of "Master in Engineering Science - Computer Science" and the title of engineer (ir.). My master thesis was in the area of computer security, specifically lowlevel security. The goal was to create a countermeasure to defend native applications (written in C) from data-only (or non-control-data) buffer overflows.

The reason I could not blog about this untill now, is because my promotor wanted to keep it quiet last year, and because the work also got published at ICISS 2010. The countermeasure was rewritten a bit, taking into account the lessons learned from the benchmarks in my thesis. The result is ValueGuard.

Code injection attacks that target the control-data of an application have been prevalent amongst exploit writers for over 20 years. Today however, these attacks are getting increasingly harder for attackers to successfully exploit due to numerous countermeasures that are deployed by modern operating systems. We believe that this fact will drive exploit writers away from classic control-data attacks and towards data-only attacks. In data-only attacks, the attacker changes key data structures that are used by the program’s logic and thus forces the control flow into existing parts of the program that would be otherwise unreachable, e.g. overflowing into a boolean variable that states whether the current user is an administrator or not and setting it to “true” thereby gaining access to the administrative functions of the program.
In this paper we present ValueGuard, a canary-based defense mechanism to protect applications against data-only buffer overflow attacks. ValueGuard inserts canary values in front of all variables and verifies their integrity whenever these variables are used. In this way, if a buffer overflow has occurred that changed the contents of a variable, ValueGuard will detect it since the variable’s canary will have also been changed. The countermeasure itself can be used either as a testing tool for applications before their final deployment or it can be applied selectively to legacy or high-risk parts of programs that we want to protect at run-time, without incurring extra time-penalties to the rest of the applications.


Link to the ValueGuard paper: valueguard.pdf
Link to the same paper from Springer: http://www.springerlink.com/content/p26243813157387x/
Link to the LIRIAS database at the university: https://lirias.kuleuven.be/handle/123456789/289765 Read full post
Older Newer